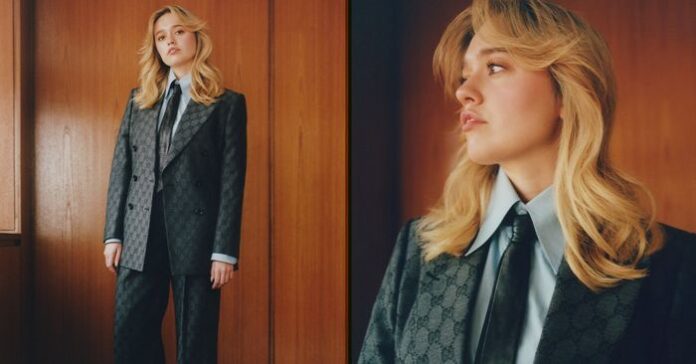 Wood has certainly enjoyed “playing a bit of a character” on the Living worldwide press tour, which has seen her walk the red carpets of the film festivals in Sundance, Venice, Toronto and London. She has picked up rave reviews along the way, and being styled by Leith Clark—who helped turn Keira Knightley and Lucy Boynton into fashion darlings—Wood has served us chic in Celine and even a custom bejewelled Miu Miu moment too. Would teenage Aimee recognise her now? “Do you know what? I really admire young Aquarius Aimee just trying shit out. I used to cringe over it,” she says. “The worst one was when I gave in to a ‘Frankie Says Relax T-shirt and purple skinny jeans’ stage. I also had a denim jacket that was covered in loads of badges. I used to go to Afflecks Palace in Manchester and get Blondie badges and The Ramones badges. Those are the [fashion moments] that really cringe me out—it was me trying to be someone else because I fancied the indie boys. Whenever I tried to impress someone else, I really messed up, because I’m not good at imitating things.”

It’s been a winding road to finding confidence for Wood, and imitation has given way to Wood harnessing the power of her uniqueness. Notable early performances include reciting a self-penned song called “Egg,” where she just sang the title word over and over, and becoming a 6-year-old playwright. “I remember writing a play and having my PE kit on. I was the narrator, and I performed it for family and friends, but I was very, very shy,” she says.

“It’s weird because I used to do all this stuff at home, and then I would go to this youth theatre, and I could never audition for the parts. I remember we were going to do Annie,” she continues. “I practiced my audition at home, and mum was like, ‘If you could get up and do it the way you’ve been doing it here in the theatre, you’ll get that part.’ On the day, everyone was singing. Everyone was auditioning, and I was thinking, ‘I could get this part.’ And then I couldn’t stand up. I got the worst stage fright. The teacher was really mean, and she was like, ‘Come on, Aimee. Are you going to do it? Is she going to do it? Are we finally going to hear her speak?’ I stood up. I just shook my head and sat down. She was doing a kind of ‘Oh, I knew it’ vibe. I remember feeling this feeling of it—like an injustice.”