Domestic airfares have increased more than 20 per cent on average since early April and are expected to go up further, as airlines try to offset higher fuel costs with price hikes, industry executives said. “Right now, the fortnightly price hike in ATF (aviation turbine fuel) leads to an increase in fares. Airlines can no longer absorb the additional burden of costs,” said a senior airline executive, who didn’t want to be named. “So, expect another hike (in airfares) on 15th of June. And this trend will continue.”

The higher cost of air travel has already started affecting demand. Passenger traffic — that was nearing pre-Covid levels — has slowed in June, according to airline executives. “Rise in ATF prices is a big concern for the industry and is impacting forward bookings due to the high fare environment,” said Gaurav Patwari, head of air business at travel portal Cleartrip. Fares on some of the busier sectors have increased by as much as 40 per cent, he said.

ATF accounts for 40 per cent of an airline’s expense. Its price has increased every fortnight since the start of this calendar year till last month, when it hit a record high.

After a 1.3 per cent cut earlier in June, fuel companies may increase prices again. At market leader IndiGo’s earnings call recently, chief executive Rono Dutta said fares would increase, but it would be a balancing act between managing fuel price and demand. “Profitability is on top of our minds,” he had said. The higher airfare came at a time when demand and airline capacity were increasing. 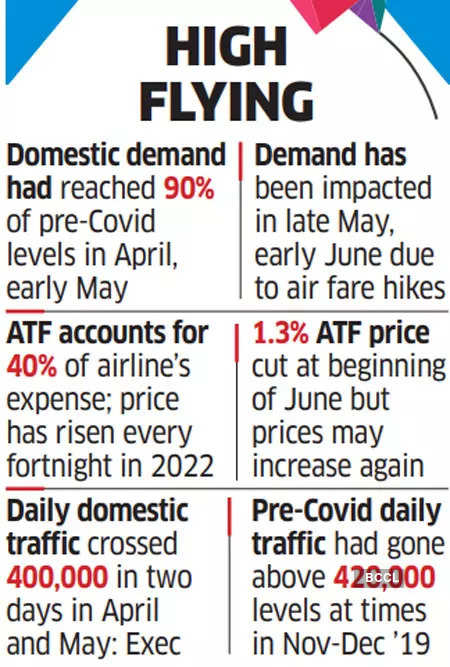 Before Covid-19, in November and December of 2019, daily traffic had touched more than 4,20,000, he said. Cleartrip’s Patwari said the recovery in domestic passenger traffic had reached 95 per cent of pre-Covid levels in April-May this year.

IndiGo’s Dutta and Vistara chief executive Vinod Kannan told ET recently that their capacity was now more than pre-Covid levels. IndiGo is currently operating 1,500 daily domestic flights, which is 25 per cent higher than the pre-Covid levels. At 250 flights a day, Vistara’s operations too have increased 25 per cent.