Angela Vaz had to wear a wig at her wedding three years ago to hide her curly hair. The freelance illustrator from Bengaluru was always told to fight it, not flaunt it. After unhappily sporting a boy cut for two-thirds of her life, she even resorted to chemical treatments like smoothening and straightening before setting foot in college. “I was bullied in college because of my hair, called names like poodles and noodles,” recalls the 25-year-old. By the final year of her engineering course, she had given in to the bullying and gone back to the non-controversial boy cut.

All the options she had to straighten her hair were temporary. Being singled out for her hair stigmatised her. “I never tried to fit in anywhere, but this episode had a huge impact on me,” she adds. Shaunak De, a PhD student at IIT-Bombay, has similar terrible memories of his schooldays. “I was constantly ragged by students and even some teachers who always thought I looked sleepy just because of my hair. I used to heavily oil my hair so it would hold shape and not curl up the way it naturally did,” the 28-year-old recalls.

Even though 60% of the world’s population has either curly or wavy hair, Indians have always considered straight hair the ideal type. The irrational obsession has over the ages manifested itself in the society’s perception and cinema’s projection of curly-haired women as quirky, wild or rebellious, and that of men with curly hair as unruly and indisciplined. 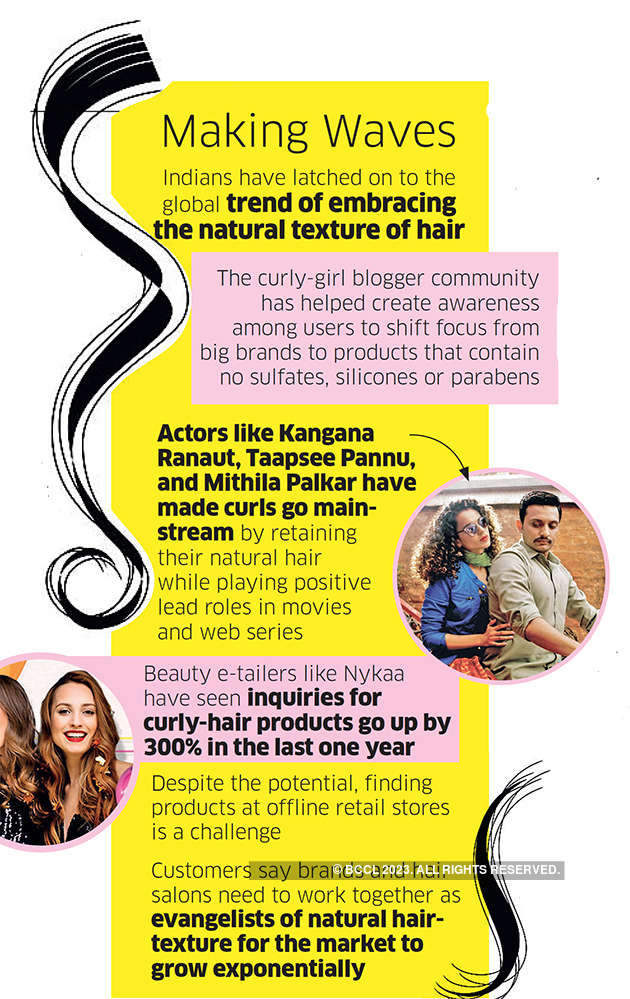 Vaz wanted to do something to change that perception. One fine June morning last year, she decided to make comic strips making light of the hassles of managing a frizzy mane. The idea resonated with many, fetching her 180,000 followers on her Instagram account @straycurls, in a matter of months. The response to the comic strips prompted Vaz to create merchandise such as badges, notebooks, bookmarks and desk magnets. She now makes 40% of her annual income selling these accessories. The Instagram adventure connected her to the global curly girl (CG) community, which made her realise curly can be beautiful, too. She discovered there were international brands (like DevaCurl) and online sites (like NaturallyCurly. com) that specialise in manufacturing and selling curly-hair products.

That the West has a full-fledged market for curly hair should come as no surprise, given that the Natural Hair Movement to embrace textured hair started in the US in the 2000s. She was, however, pleasantly surprised to find out that there was an active CG community in India as well.

The Indian online CG community boasts of a 15,000-member Facebook group called Indian Curl Pride. Started by Asha Barrak as a closed group in February 2015, Indian Curl Pride gets 25-30 posts a day and an average of 1,000 posts a month. Members discuss everything from tips on managing curly hair to sharing pictures of hair transformation in the process of ditching chemical straightening and going natural.

“I was always intrigued by how people outside India had such refined curls,” says Barrak, a 32-year-old former information technology professional based in Singapore. She looked up the ingredients that are essential for CG-friendly hair products and started using shampoos and conditioners free from three ingredients commonly found in shampoos and conditioners — sulfates, silicones and parabens. Sodium lauryl sulfate is an ingredient that can be great for straight hair but harsh on curly hair, leaving them dry and frizzy. Silicones weigh the curls down. Researchers have also found that preservatives like parabens have carcinogenic traces.

Once Barrak started using products bettersuited to her ringlets, people started asking her how her curls had become so refined. “I wanted people to know they, too, can transform their hair while retaining its natural texture. They are just not aware of the basics, like you aren’t supposed to comb curly hair or use a towel to dry them.”

Bloggers such as Anjana Muralidharan have been trying to spread the word about the CG guide to healthy and beautiful hair through her three-year-old blog Curls and Beauty Diary.

A tenth of the queries on her blog come from curly-haired men. “Earlier, women at salons would suggest I straighten my hair. Now they ask me how to get curls like mine, and spread the word about my blog.”

Salons are considered to be the chief architect of the natural hair revolution in India, because users rely on their word more than that of anybody else. “And for the longest time, they didn’t know any better than to suggest straightening and smoothening treatment to curly-haired customers,” says Muralidharan, a 28-year-old software professional from Bengaluru.

Happy In The Head, a Mumbai-based hair studio, is an exception. Its owner, Avani Yashwin, has never straightened any customer’s hair herself in her decade-long career. “We encourage people to wear their natural hair and use the right products to nurture them.”

She recommends a list of products but does not keep any on the counter for sale. This makes it easier for customers to trust that there is nothing in it for her. Like most other proponents of the CG community, Yashwin, too, has a personal attachment to the cause. “Growing up, I had seen my mother struggle with her curly hair, which taught me how to appreciate and champion different hair types,” she says. Seven out of 10 curlyhaired women who visit Happy In The Head like their natural hair and want to wear them correctly, she says. 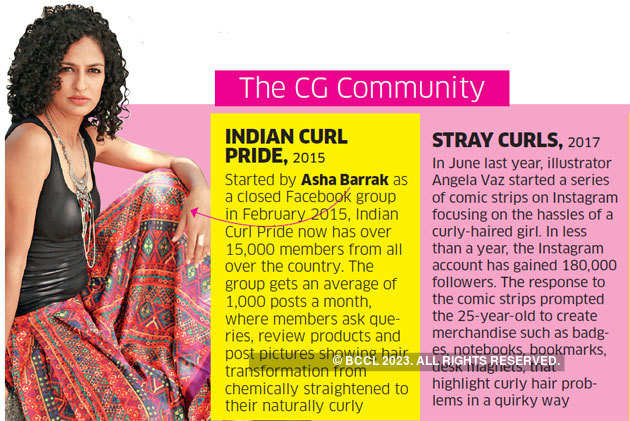 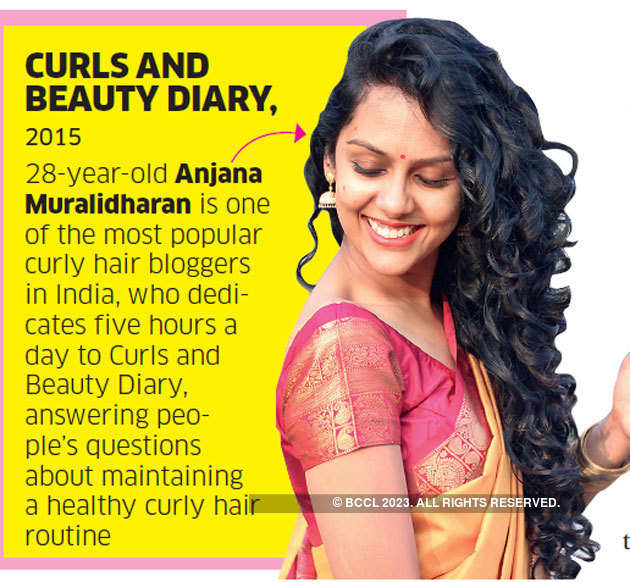 At HUL’s Lakme Salon, cysteine infusion (a treatment to give a natural gloss to wavy and curly hair) has taken over traditional favourites such as straightening and rebonding, used to straighten hair. The numbers are encouraging for other leading hair care brands as well. About 20% of BBlunt’s sales within the styling portfolio comes from HD Curl, its range of products to shape and define curls. The Mumbai-based salon also posts videos of curly-hairstyling tips for both men and women. Sales from the curly range of L’Oréal’s brand Kerastase grew by over 60% in the first quarter of 2018 compared with the corresponding period last year. Schwarzkopf India now has a range called Real Me for curly and wavy hair. About 2% of its product range is dedicated to this hair type. “The trend of natural waves and curls is niche,” says Rachit Mathur, general manager at Kerastase India. “But it is a growing movement at the premium end of the market, encouraged and influenced by hairdressers.”

The movement has got a push from celebrities such as Kangana Ranaut, Aditya Roy Kapur, Taapsee Pannu and Mithila Palkar. They have helped make curls go mainstream by retaining their natural hair while playing leading positive roles in movies and web series. Inspired by the winds of change, even IIT-Bombay’s De has stopped trying to flatten his hair.

“Last month, a popular magazine cover had a famous Bollywood celebrity sporting her curly hair,” says Kartik Kaushik, country head, Schwarzkopf, Henkel Beauty Care Professional-India. “In the past, she would have been showcased with carefully blow-dried and straightened hair. This shows a definite shift and acceptance of curls.”

No wonder then that beauty and wellness etailers like Nykaa have seen a 300% jump in inquiries about curly-hair products in the last one year. A May 2017 report by Euromonitor International estimates the size of Indian hair care industry at Rs 19,500 crore. Category experts peg the market for curly and wavy hair to be Rs 200 crore at the moment, what with every leading hair care brand introducing or beefing up its range of curly hair products in the country.

A US-based hair care brand called Darshana boasts Indian natural oils and ayurveda at its core, and has gained popularity with the nonresident Indian CG community in the US. “My father grew up in Mumbai and would use Indian oils as part of his daily hair-care routine.

It was something that always fascinated me and I wanted to bring India’s exotic hair routine to the West,” says Darius Irani, cofounder of Darshana. Irani often gets queries from India, asking him if they have a distribution network in the country — something he is working on setting up.

Retail Opportunity
Despite the potential, finding curly-hair products at offline retail stores in India is a challenge. Another challenge is spotting products that are doing lip service to the cause. These would be the products that contain sulfates and/or silicones despite claiming to be CG-friendly. There seems to be no doubt though that the market is set to grow both online and offline. And about time, some would say. As Priyal Sanghavi, a Mumbai-based member of Indian Curl Pride, says: “So often, our hair becomes a part of our identity crisis. You go through a breakup, you get a haircut. It’s a psychological extension of your state of mind. You nurture it, it feels good. Imagine the wonders it’ll do to the offline CG community if these products are easily available at the counter.”

After all, it is time the curly-haired brigade let their hair down.