Reliance Industries Ltd is in talks to acquire brands such as Garden Namkeens from CavinKare, besides other brands such as Lahori Zeera and Bindu Beverages in a bid to strengthen its fast-moving consumer goods (FMCG) play, people familiar with the development told ET.

According to a person close to the development, Reliance is at an “advanced stage” of negotiations with all three companies.

Acquiring more brands in the FMCG space is in line with the company’s strategy, the person said. In all three cases, Reliance is currently negotiating deal terms.

According to its website, the launch of packaged drinking water brand Bindu Mineral Water led to the establishment of SG Corporates, the company behind Bindu Beverages. The flagship Bindu Fizz Jeera Masala drink was launched in 2002. 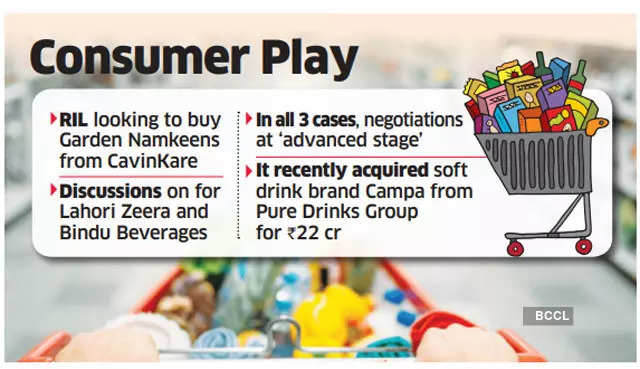 Apart from Lahori Zeera, Lahori drinks are available in other flavours such as Nimboo, Kacha Aam, and Shikanji. The company states on its website that it was launched with an aim of introducing traditional Indian flavours with a “zing.”

“There will be different structures that will have to be put in place. In certain cases, the brands are owned by larger groups, while in certain cases, some promoters want to retain certain equity,” the person said.

Reliance, Bindu Beverages and Lahori didn’t respond to queries sent on Friday evening. CavinKare didn’t reply to questions specifically about a possible acquisition but forwarded an email that was a response to a separate ET query that read: “We do not want to comment on this type of corporate speculation.”

Experts said India could see more consolidation in the consumer space in the next few years.