Soybean will continue a rally in the near-term; may hit Rs 6,200 a quintal, Retail News, ET Retail 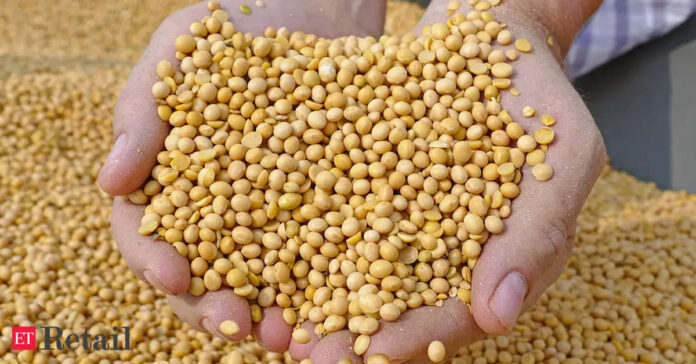 Soybean Indore prices have shown a whopping 8% rally after the removal of stock limits on Oil and Oilseed for wholesale dealers and big retail chains, which was announced on November 01, 2022, and long demanded by the millers, crushers, and associations.

This Step has perked up bulk demand for soybean that is not able to meet by the current arrivals, resulting in a higher price and bullish trend despite the higher 12.48MMT crop this season. Farmers, too, are getting a better realization.

There is aggressive buying demand by millers, big buyers, and crushers who are directly coming to the mandis to buy a soybean crop. Total arrivals in October were 0.8MMT and it would be about 1MMT in November and 1.5MMT in December 2022, respectively.

Good quality soybean prices, which were around Rs5000 to Rs.5,100 per quintal in October last week, are hovering around Rs 5,750 per quintal and this level, too, is attracting buying interest.

Looking at the current demand-supply mismatch, prices are likely to stay strong in the short-term and may go up to Rs 6,200/quintal before finding any sort of stability.

Prices of soy oil have also perked up recently but the main reason for the rally in the prices was initially surging palm oil prices in Malaysia which rallied from 3,800 ringgits per tonne to 4495 per tonne in a fortnight’s time. Of late, a rally in soybean prices in the domestic market furthered the momentum.

We still believe the rally in soy oil prices is momentary and will not last long as supplies from South America, that is, Brazil and Argentina are expected to be higher than last year. Last season about 22MMT to 25MMT of soybean was lost in South America due to severe drought.

This season if all goes right, Brazil is expected to harvest about 145MMT to 150MMT of soybean versus 122MMT in the crop season 2021.022. Similarly, Argentina’s Soybean production is estimated around 48MMT to 51MMT versus 42MMT last year.

This along with higher production of Crude Palm Oil and its stock in Malaysia and Indonesia will keep the global edible oils prices stable in the band. We should not forget that the Palm production cycle is on the rising side, not declining, which means the palm is likely to stay stable.