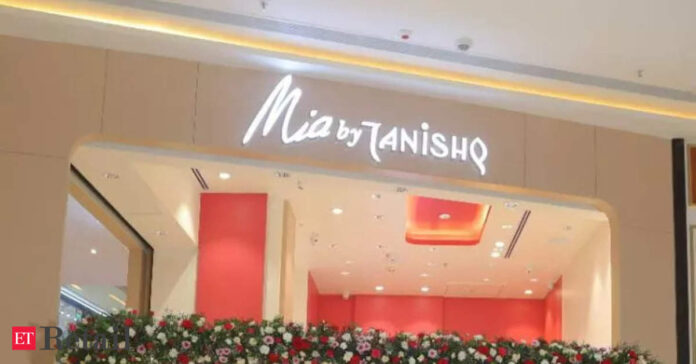 New Delhi: Titan-owned Mia by Tanishq which makes lightweight, workwear, and millennial and GenZ-focused jewellery aims to open 16 more stores and take the count to 100 by the end of this financial year, shared a top official of the company. Mia currently has 84 stores, of which 44 were opened this year.

Sharing how the brand’s retail strategy has evolved, Shyamala Ramanan, Business Head, Mia by Tanishq shared that earlier the jewellery retailer was present only in malls with stores spread across 200 to 250 square feet of retail space. However, during COVID, as malls were one of the worst hits, the brand gave its retail identity a change and shifted to the high street, opening large format, 500-700 square feet stores.

In terms of geography, Ramanan said that the brand has a strong retail presence beyond the top 10 metros and is present in markets such as Jabalpur, Ranchi, Cochin, Indore, and more.

In addition to its standalone retail outlets, Mia is present across 250 Tanishq stores. The brand also sells online via Amazon, TataCliq and its own website.

Comparing the two channels, she said, “Our online to offline is skewed where offline is much more than our online.” She shared that the brand is largely an offline player and is focusing on setting a firm foot on the ground before dabbling into online channels.

Ramanan also highlighted that while the company’s retail strategy is offline-focused, marketing-wise it is a digital brand. Mia recently released a brand campaign featuring real-life influencers.

Speaking about international plans, she shared that the company is exploring international markets and plans to share announcements on the same in the coming quarter.

Mia’s parent company Titan in its second quarter results announced that its jewellery division grew 18 per cent year-on-year adding that while the jewellery product mix improved when compared to last year, it remained below pre-pandemic levels.

Apart from Mia, Titan recently shared that it plans to triple the number of stores over the next five years for its luxury jewellery brand, Zoya.