India, falling into the lower-middle income economies was ranked 56 in the newly christened travel and tourism rankings by the World Economic Forum (WEF). Till 2019, WEF used to release the Travel and Tourism Competitiveness Index (TTCI) report biennially, which measured the factors and policies that make a country a viable place to invest within the Travel and Tourism sector on six broad parameters.

From the 2021 report, WEF publishes the Travel and Tourism Development Index (TTDI) as an evolution of the TTCI, which was first published in 2007. According to TTCI in 2019, India was ranked 34 in the index where 140 countries were ranked. With TTDI, WEF has expanded the measurement horizons, termed as ‘pillars’ to 17 and ranked India at 56. With this, 2019 ranking of India has also been revised to 46 out of 117 nations analysed in the index.

India has slid down from 46th in 2019 to the 54th place in global travel and tourism development index. The World Economic Forum’s biennial travel and tourism study also showed a recovering sector following pandemic lows, though the recovery has been uneven and challenges remain. Japan has topped the global charts, followed by the US, Spain, France, Germany, Switzerland, Australia, UK, Singapore and Italy in the top ten.

So, the overall ranking points allotted to India were 4.1 this year which is a depreciation to what India achieved in 2019, when it has received 4.2 points. This is a 2.57 per cent drop, which led India’s ranking fall by 8 spots. Comparing the individual sub-indexes of TTDI, India lost considerably on Enabling Environment and Policy and Enabling Conditions sub-index, where the country’s ranking fell by 17 and 7 points respectively in comparison to 2019-rankings.

Deep diving into comparisons on the pillars, India lost most points and ranks on Business Environment, where India’s position dropped to 92 in 2021, reflecting a decline of 54 ranking points in comparison to 2019, when India was ranked a moderate 38th. Another pillar where India performed badly this year is the Human Resource and Labour Market. In 2019, India was ranked 67th and this year, the ranking in the same pillar has gone down to 98. These parameters suggest the area where the country has lacked behind in the last two years, when the world was battling the Covid-19 pandemic.

Looking at the positives from this year’s rankings, India has made small but significant strides up in a few of the pillars. In the ICT Readiness, Air Transport Infrastructure and Demand Pressure and Impact parameter, India has improved its position from 2019. While India’s ranking has improved by 10 spots in air transport infrastructure, there has been a significant improvement in the travel and tourism demand pressure and impact pillar, where the ranking has got better by 8 positions. 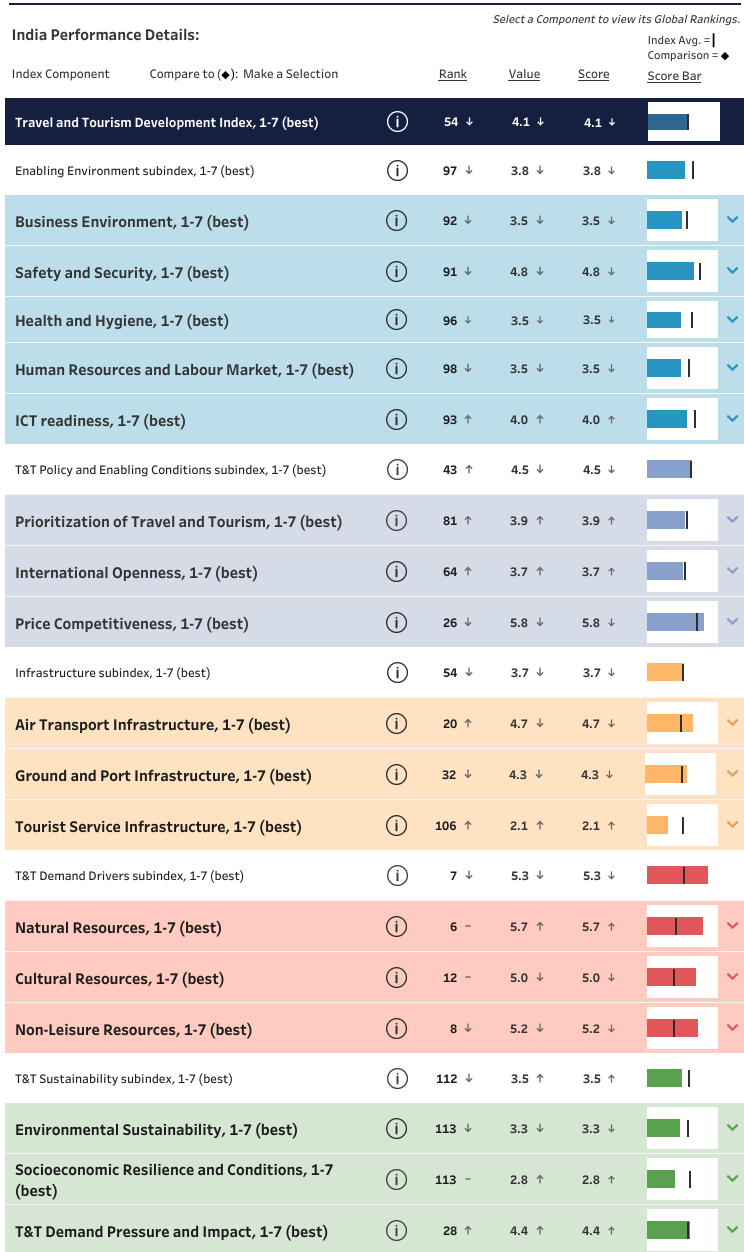